In the Alteryx AMP Engine article we covered the Alteryx Engine and the new Alteryx Multi-threaded Processing (AMP). Now let’s go deeper into the main differences between the 2.

The original Engine architecture allows for mostly single-threaded processing, where your data are processed record-by-record sequentially. On the other hand, the new AMP concept allows for massively multi-threaded processing. Records process in 4 MB packets for a faster run time, and in parallel, which can affect the output record order.

CSV files that contain a field with quoted newlines fail if you don't enable the additional option AMP only: quoted fields can have newlines in them.

The workflow configuration runtime setting Record Limit for all inputs is enabled with AMP for the following tools:

AMP support for the tool level Record Limit in the Dynamic Input tool was added with the 2021.1 Patch 2 and all subsequent Releases.

Several tools might output records in a different order than the original Engine when a workflow runs with the AMP engine. Some of those tools include...

If your workflow requires records from the above tools to be in a specific order for downstream operations, the Engine Compatibility Mode is available to maintain the same sortation as the original Engine. This should be used after careful consideration of the specific workflow, mainly when migrating workflows that were created with the original Engine to run with AMP Engine.

Specific functionality or configuration that has not been converted to AMP reverts to the original Engine tool in order to work. Therefore workflows that contain both AMP-converted and non-converted tools run seamlessly with AMP.

If you have questions as to which tools might have been converted to AMP, go to Tool Use with AMP.

With the Original Engine tools are more connected to downstream tools and would stop working as soon as they saw nothing downstream. With AMP parallel running, the tools may not stop when there is no longer anything downstream. The assumption is that with the empty downstream, the data stream is not taken into account. The Info in the log message is just for information. If the number of records in the stream is important to you, you can put a Test tool on it and have it give an error message if it doesn't get the right number of records.

The YXDB file written with the original Engine reads slower with AMP enabled. The formats are still compatible with each other.
Use XLSX, CSV, YXDB, and SQLite file formats with AMP—they support multi-threaded, read-in data.

There is a performance cost to converting records and packaging between original Engine and AMP when reading in Zip files. This may cause larger Zip files to read significantly slower with AMP.

The Output tool behaves differently with records containing SpatialObj data when saving CSV file with the original and AMP Engine. While AMP Engine writes SpatialObj data in to the file when saving as CSV file, the original Engine doesn’t. This difference causes file size difference and you may experience decreased performance.
IF needed, a workaround is to remove the spatial data from the records by using the Select tool, then both Engines will complete with similar durations.

Performance Profiling per tool with AMP is available with Designer version 2021.3 and newer.

AMP passes data to and from R in the original Engine format. This double conversion takes time. Single R tool execution time can be slower with AMP than with the original Engine, but it will be faster if more than one branch are run simultaneously.

AMP addresses a historic issue where the size of the field might not be large enough when processed by a downstream tool. You don't need to add Select tools to change data types when the resulting data exceeds the length of the original data type. AMP creates the maximum size field for strings and integers so that subsequent operations have the necessary room to hold larger downstream values.

Although the Throttle tool was not fully converted to AMP, you can use it together with the Download tool (Throttle first).

AMP uses Unicode and Perl encoding standards, where the characters $, +, <, =, >, ^, |, and ~ don't qualify as punctuation. When you use the formula function REGEX_Replace or the RegEx tool to filter punctuation with the RegEx set [[:punct:]], with AMP you need to change the expression.

If we join by CustomerID with the original Engine, the record order is sorted by the CustomerID field:

With AMP, records are the same but in a different order:

If you need to have sorted order in join output, add the  Sort  tool after  Join or enable the Engine Compatibility Mode setting in Workflow Configuration > Runtime, below the Use AMP Engine setting. 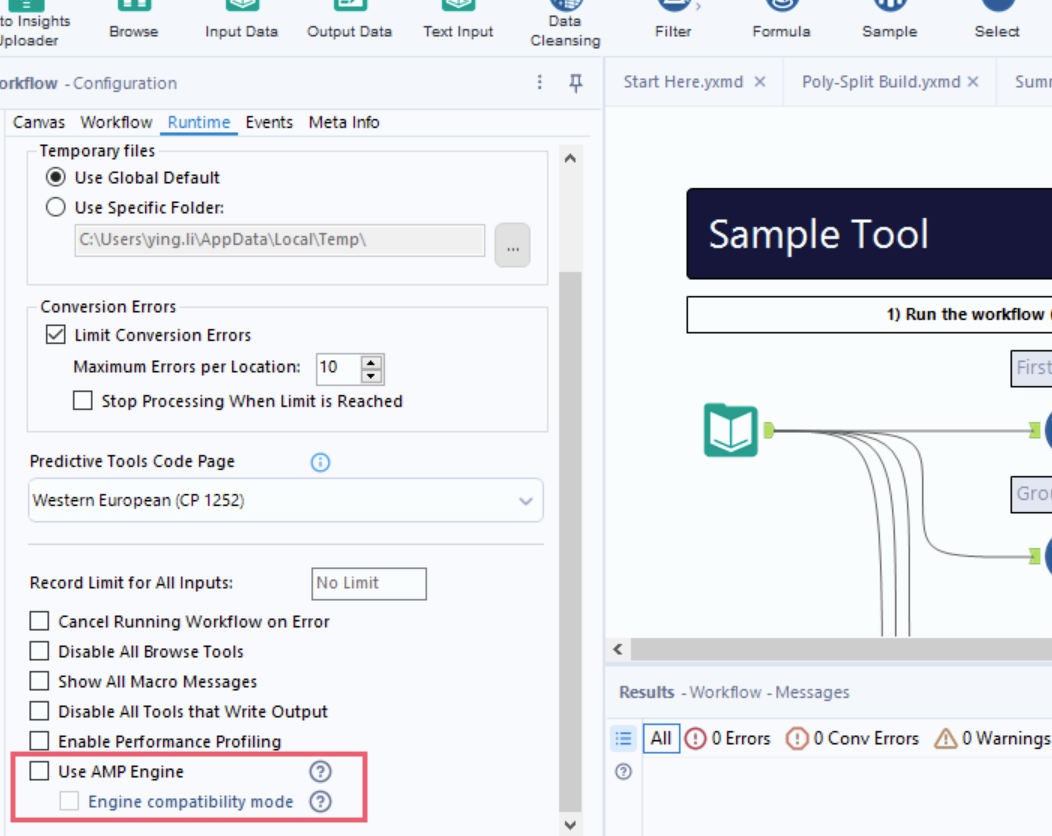 The difference between the original Engine and AMP can occur when a tool inside the macro reports an error. Being single-threaded, the original Engine stops if an error occurs in the macro. AMP works until the iterative output is empty or the maximum number of iterations occurs. You can encounter these situations, due to a higher number of iterations:

A different binary representation of the input data is caused by AMP's internal use of UTF-8 encoded strings. When the data with a different encoding is imported, there is no way to restore the original data. The original Engine stores strings as Latin-1 or UTF-16 encoded strings that were used as a buffer and allows to convert data back correctly.

Formula Add-Ins are not yet supported with AMP. If you need to run a workflow that contains Formula Add-In functionality, run it on the original Engine.

Apps that use the Map tool to select from a spatial reference layer in an Analytic App should continue using original Engine.

With the original Engine, Expect Equal remains a CReW macro. With AMP it runs as a native tool.

Some workflows read from a file and then write back to it. This requires sequencing to ensure that the read is complete before the write can start. Similarly, a workflow that wants to write several sheets in one XLSX file needs to write the sheets one at a time. Alteryx Designer provides a Block Until Done (BUD) tool to help partition the work into phases that won’t get in each other’s way.
Same workaround is applicable for Email tool when you use output file(s) from previous branch(es) as attachment. You need to wait once data processing is complete and then add as attachment to the Email tool.

When you work on a workflow with multiple branches (largely separate streams from inputs to outputs), place the BUD tool in the workflow branch with the lowest numbered Input tool ID. This ensures every subsequent branch waits to run until the previous branch is done and the tool works as expected.

For more information regarding specific tool functionality, go to Tool Use with AMP.